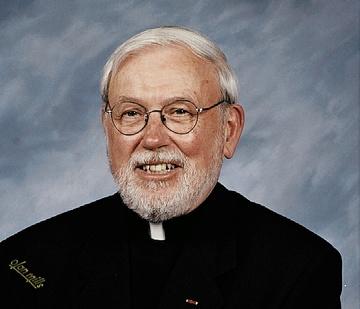 Baldwin’s funeral Mass was celebrated on Saturday, April 13, 2019, at St. Philip Neri Church in Alameda, Calif. A memorial Mass with the Rite of Committal will be celebrated Saturday, Sept. 14, 2019, at 11 a.m. at St. Norbert and Our Lady of the Brook Church, 3700 Dundee Road, Northbrook, Ill.

Bishop Francis Kane will be the main celebrant and Kalas will be the homilist. Interment will take place after the liturgy at Calvary Catholic Cemetery in Evanston, Ill.

Baldwin was born on Sept. 14, 1933, in Chicago and attended St. Clare of Montefalco Catholic Church and Quigley Preparatory Seminary, both in Chicago. He graduated with a master’s degree from the University of St. Mary of the Lake/Mundelein Seminary in Mundelein, Ill., in 1958.

Baldwin was ordained to the priesthood on May 7, 1959, by Albert Cardinal Meyer, archbishop of Chicago, and celebrated his first solemn Mass at St. Clare of Montefalco Catholic Church in Chicago on May 10 of the same year.

After ordination to priesthood, Baldwin served the archdiocese as assistant pastor at Resurrection Parish on Jackson Street in Chicago and at St. Joseph Parish in Round Lake, Ill. He was assigned as chaplain of the U.S. Navy in 1968 and served in that role until retirement.

Monsignor Michael J. Adams, pastor emeritus of St. Mary Star of the Sea Parish on 64th Street in Chicago and classmate of Baldwin, had known him for 70 years. “He was curious about everything. He liked to talk to people – he was very friendly, and people responded well to him.”

Rev. Edward J. McLaughlin, pastor emeritus of St. Michael Parish in Orland Park, Ill., remembers his classmate as a very inquisitive person and a great musician. “He loved to serve the Navy: He was very dedicated as a chaplain and very proud of it.”

“He was always interested in many new things and had traveled the world,” said Rev. Ronald Kalas, vicar for senior priests. Kalas added that his classmate was very interested in organ music – his favorite piece played at various occasions was Charles-Marie Widor’s “Toccata.”