Jegen, a religious sister for the Sisters of Charity of the Blessed Virgin Mary, is remembered as a pioneer in religious education and Jewish-Christian relations 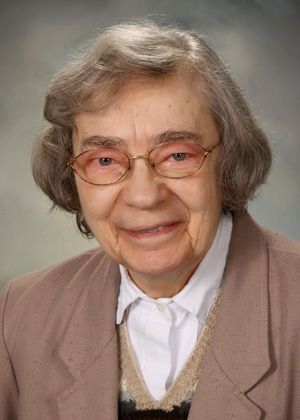 Chicago, (July 22, 2020) – Sister Carol Frances Jegen, BVM, a retired religious sister for the Sisters of Charity of the Blessed Virgin Mary and former professor of religion and peace studies at Mundelein College and Loyola University in Chicago, passed away on July 7, 2020, at Marian Hall in Dubuque, Iowa at the age of 94. She is considered a pioneer in religious education and Jewish-Christian relations on behalf of the Archdiocese of Chicago.

Jegen was born on Oct. 11, 1925, in Chicago as Julia Anna to Julian and Evelyn (Bostelmann) Jegen. Jegen is an alumna of Immaculata High School, Chicago. She entered the BVM congregation Sept. 8, 1944, from St. Robert Bellarmine Parish, Chicago. On her reception day, she became a novice and received the name of Carol Frances. This name honored her sister Carol and established a special relationship with Francis of Assisi and Mary Frances Clarke, the founder of the BVM Congregation. Jegen professed first vows on March 19, 1947, and final vows on Aug. 15, 1952.

She ministered as a teacher at Holy Family Elementary School in Mason City, Iowa, St. Xavier School in St. Louis and Holy Angels Academy in Milwaukee. She was a professor at Mundelein College (1957-1991) and Loyola University (1991-2000) both in Chicago. While at Mundelein College, she founded the Religious Studies Department, Hispanic Institute, the Mundelein Interfaith Center for Religious Education and the Center for Women and Peace.

Jegen earned a Bachelor of Science degree in history from St. Louis University in 1951. She completed her master’s degree in Theology in 1958 and her Ph.D. in Religious Studies in 1968 from Marquette University. She was one of the first women religious in the United States to earn a doctorate in theology. Her lifelong vocation was spent educating Catholics in theology and religious education. She wrote five books and published more than 20 articles.

Religious education, particularly teaching Catholic women and laity, was Jegen’s passion and the impetus of her ministry. She saw it as fundamental that religious educators and lay ministers have a strong theological foundation. According to Paulette Skiba, BVM, professor of religious studies at Clarke University, “the heart of her theology was the revelation of God as inviting all to share in God’s own life of love in Jesus Christ and the Holy Spirit. She was a theologian who had a gift of making the theological tradition of the Church understandable and practical.” Avis Clendenen, D.Min., Ph.D., professor emerita of religious studies at Saint Xavier University/Chicago and final director for the Mundelein program in religious studies, added “Sister Carol Frances was not only an exquisite educator; she was also an experience of grace. We are so much better for her having been among us.”

Under Jegen’s leadership, Mundelein developed and hosted a summer institute for elementary and high school religious education teachers with courses including Scripture, theology, and catechesis. She also co-founded the Mundelein Center for Religious Education and co-created an audio-visual lending library for area schools and parishes where fellow BVM sisters were teaching. Through financial support from the BVM and the Jegen family, the collection of tapes and film grew substantially that helped theological educators be well prepared to meet the developmental needs of children, adolescents and adults. Many depended on the Mundelein Center for Religious Education to provide the most current and helpful materials in a post-Vatican II Church. In the early 1990's the Archdiocese of Chicago’s Office for Catechesis accepted the gift of the full Mundelein Center and the Jegen Center was born to continue on with Jegen’s vision of catechesis.

Jegen’s leadership in catechetics and religious education was recognized, and she served on many advisory councils and boards, including an appointment by Cardinal Albert Meyer to the Archdiocese of Chicago Liturgical Commission and to the National Liturgical Commission. She was on the national bishops’ advisory board and attended the International Catechetical Conference as the representative if the U.S. bishops.

From the beginning of her religious formation, Jegen valued and deeply respected different faith traditions which shaped her interreligious relationships especially with Jews. In 1965, the Second Vatican Council made historical changes by publishing “Nostra Aetate (In Our Time): Declaration on the Relation of the Church to Non-Christian Religions,” which revolutionized the Catholic Church’s relationship with Jews and Judaism. The declaration urged Catholics and Jews to engage in friendly dialogue and theological discussions to better understand each other's faith.

“Carol Frances Jegen was a pioneer in what today we know as Catholic-Jewish relations,” said Very Rev. Thomas Baima, vicar for ecumenical and interreligious affairs for the Archdiocese of Chicago. “As the Second Vatican Council was ending in 1965, Sister Carol was introducing ecumenical and interreligious perspectives into the Summer Lecture Series which Mundelein College hosted for religious educators. Formation of the next generation through such engagements was a passion which animated her life and ministry.”

A Catholic-Jewish discussion group soon began meeting at the Mundelein College Interfaith Center for Religious Education which led to the college becoming a center of interfaith dialogue. In 1983, Cardinal Joseph Bernardin and leaders of the Jewish Federation established a Catholic-Jewish Scholars Dialogue and Jegen was one of the first invited into the group. Rabbi Dr. Byron Sherwin, academic vice president of Spertus College, now the Spertus Institute for Jewish Leadership and Learning, and Jegen developed a collaborative relationship between colleges.

In 1985, Jegen was invited to give the Solomon Goldman Lecture at Spertus. She was the first scholar to address the school as an interfaith speaker on the Jewish tradition. Mundelein College hosted the 20th anniversary celebration of Nostra Aetate that year and it was one of the largest gatherings of the Catholic and Jewish communities in Chicago.

“Sr. Carol was so well respected that she was able to easily facilitate bringing groups together,” noted Rev. John Pawlikowski of Catholic Theological Union. “I remember in particular her impact on the process that lead to the eventual formation of parish/synagogue dialogue groups. She was also instrumental in organizing the 20th anniversary celebration of Nostra Aetate with Cardinal Bernardin at Mundelein College in 1985.”

Dr. Jon Nilson, professor emeritus of theology at Loyola University Chicago and theological Consultation in the Archdiocese of Chicago Ecumenical and Interreligious Office, recalled the day “Sister Carol walked down the street to Congregation Emanuel and invited Rabbi Herman Schaalman to teach in one of her classes. She was a woman with a sharp mind and a boldness committed to improving formation and intergroup relations.”

Jegen and Sherwin co-authored the book, “Thank God: Prayers for Jews and Christians Together” published by Liturgy Training Publications in 1989. The book contains a collection of prayers and orders of service to be used when Jews and Christians gather together. In 1991, the Jewish Federation of Chicago proposed taking the Catholic-Jewish Scholars on a historic tour of the Holy Land in which Jegen was a guest.

Over her lifetime, Jegen was the recipient of several awards including the Loyola University Civic Award, the Chicago Medallion for Excellence in Catechesis presented by Cardinal Joseph Bernardin, the Sor Juana Award for Hispanic Ministry, a finalist for the Sears Teaching Award and named to “100 Women to Watch” by Today's Chicago Woman.

She was preceded in death by her parents; a sister Sister Mary Evelyn Jegen, SND; a brother Richard Jegen; and brother-in-law Robert Belke. She is survived by sisters Carol Belke, West Bloomfield, Mich., and Sister Evelyn Jegen, RC, Chicago; sister-in-law Genevieve Jegen, Chicago; nieces; nephews; and the Sisters of Charity, BVM, with whom she shared life for 75 years.