Fr. Jabusch was the Former Chaplain and Director of Calvert House at the University of Chicago and Professor at St. Mary of the Lake / Mundelein Seminary 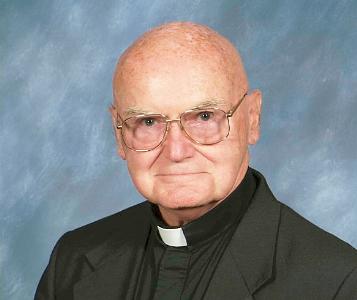 Born on March 12, 1930, in Chicago, Fr. Jabusch attended Quigley Preparatory Seminary in Chicago. In addition to his theology degree from the University of St. Mary of the Lake/Mundelein Seminary in Mundelein, Ill., he received a master’s degree in English from Loyola University Chicago and a doctorate in speech from Northwestern University.

Fr. Jabusch was ordained to the priesthood on May 1, 1956, in Chicago and celebrated his first solemn Mass at St. Therese Parish in Chicago on May 3, 1956.

Following priesthood, Fr. Jabusch served the archdiocese in a number of roles: He was assistant pastor at St. James Parish on Wabash Avenue in Chicago, chaplain and director of Calvert House at the University of Chicago, faculty member at Quigley Preparatory Seminary, at Niles College and at the University of St. Mary of the Lake/Mundelein Seminary in Mundelein, Ill., where he taught for more than 20 years.

Rev. John Kartje, rector/president of the University of Saint Mary of the Lake/Mundelein Seminary, knew “Fr. Bill” during his entire time in college at the University of Chicago, where Fr. Jabusch was the campus chaplain. “He was very influential in inviting me to think about the priesthood,” said Fr. Kartje. “In addition to being an avid composer and musician, he loved learning and conversing over just about any topic the students were interested in.”

Fr. Kartje recalled how Fr. Jabusch was always friendly and engaging and was known for his kindness to anybody who happened to stop by the college chapel, whether Catholic or not. “I will always be grateful for the gift of his guidance and friendship,” Fr. Kartje added.

“I knew Fr. Jabusch extremely well,” said Very Rev. Gregory S. Sakowicz, rector of Holy Name Cathedral in Chicago. “He was my priest cam director when I entered seminary in the fall of 1975. He and I have been great friends over the years and we even took a great vacation together in Kalispell, Montana, in June 1990. As we walked the mountains, he was walking faster than the wild goats!” During seminary, Fr. Jabusch used to teach Fr. Sakowicz homiletics. Fr. Sakowicz remembers Fr. Jabusch’s passion for preaching and his exhortation to “set the pulpit on fire!” The homiletics professor also used to say, “Never pass on an opportunity – even with a smaller crowd – to preach the Word of Christ,” according to Fr. Sakowicz. “He had a real passion for life, terrific sense of humor and a great laugh.”

Fr. Jabusch wrote many hymns and tunes, including “The King of Glory,” a well-known song based on an Israeli folk tune that he learned while studying in Israel. Fr. Jabusch is now with the King of Glory he loved so much. May his soul rest in peace.

Fr. Kartje will be the main celebrant while Fr. Sakowicz will be the homilist of the funeral Mass.