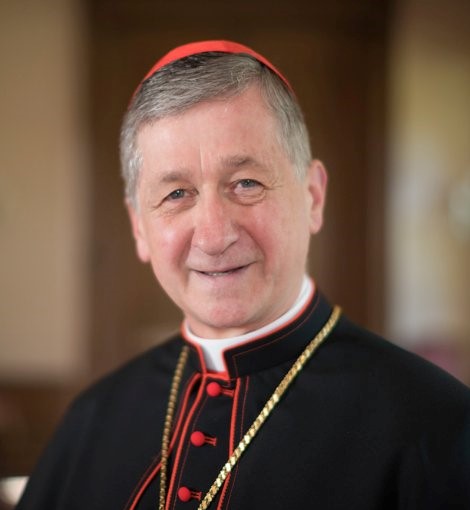 Cardinal Blase Joseph Cupich was born on March 19, 1949, in Omaha, Nebraska, to Blase and Mary (Mayhan) Cupich.  He is one of nine children, with five sisters and three brothers.

On October 9, 2016, Pope Francis named him a Cardinal and he was elevated to the College of Cardinals in a consistory on November 19, 2016, at St. Peter’s Basilica in Vatican City.

Additionally, Cardinal Cupich was Secretary at the Apostolic Nunciature in Washington, D.C. from 1981-1987, and served as Chair for the United States Conference of Catholic Bishops’ (USCCB) Committee for the Protection of Children and Young People from 2008-2011 and for the National Catholic Educational Association from 2013-2015.

Pope Francis appointed Cardinal Cupich to the Dicastery for Bishops (2016), the Dicastery for Culture and Education (2017) and the Dicastery for Divine Worship and the Discipline of the Sacraments (2022).  Cardinal Cupich also serves on the USCCB Administrative Committee and Subcommittee for the Church in Central and Eastern Europe.  He is a consultant to the USCCB Ecumenical and Interreligious Affairs Committee and Co-Chair of the National Dialogue Initiative with Muslims.  He is an Executive Member of The Catholic Mutual Relief Society and Chancellor of the Catholic Church Extension Society, and the University of St. Mary of the Lake, Mundelein, Illinois.