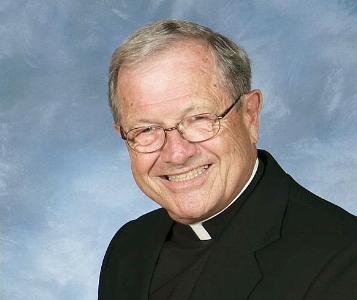 Hergenrother was born on March 28, 1940, in Chicago, and attended St. Laurence Catholic School, Quigley Preparatory Seminary in Chicago and St. Mary of the Lake/Mundelein Seminary in Mundelein, Ill.

Hergenrother was ordained to the priesthood with 13 seminarians on April 26, 1966, by Archbishop John P. Cody, and he celebrated his first solemn Mass at St. Philip Neri Parish in Chicago on May 8 of the same year.

Hergenrother’s pastoral service included parish, archdiocesan and national administrative roles: He assisted the archbishop of Chicago as chancellor and as a judge of the Metropolitan Tribunal. He also served as associate pastor at Immaculate Heart of Mary Parish on Spaulding Avenue, St. Ferdinand Parish on Barry Avenue and St. Monica Parish on Foster Avenue, all in Chicago. He became pastor of St. Louise de Marillac Parish in La Grange Park, Ill., in 1985 and was named pastor emeritus in 2010.

Classmate and longtime friend Patrick Reardon said Hergenrother was a credit to his ordination class. Rev. John Price, also a classmate and retired priest, mentioned that Hergenrother was very intent on his role as a priest. “I was always impressed by his seriousness and good humor,” Price added.

“He loved ministering and assisting people. He was a common-sense person, a man of faith who was very well-respected and had a good sense of humor,” said classmate Rev. William Moriarity, retired priest resident at Holy Name Cathedral who remembered Hergenrother as a smart, honest and private man.

Rev. Gerald Rogala, retired priest and pastor emeritus of St. Thecla Parish on Devon Avenue in Chicago, recalled that his classmate had a quiet and thoughtful personality. He added that many years ago Hergenrother injured his back and – according to Rogala – he never complained. “He will be missed.”

“A man of courage, humor, and grace, his gentle presence will be greatly missed at the Metropolitan Tribunal and beyond,” said Judicial Vicar Very Rev. Jeffrey Grob.

Rev. Michael Bradley, adjutant judicial vicar who worked with Hergenrother for approximately 22 years, shared that Hergenrother wrote about the spirit of joy as the Second Vatican Council was unfolding during Hergenrother’s final years in the seminary. He wrote that he felt that same “spirit renewed with Pope Francis challenging us to live the joy of Jesus’ merciful Gospel and the documents of Vatican II being implemented.”

Bradley added that Hergenrother mentored and inspired many at the Metropolitan Tribunal. “He was always a joy-filled presence here, and he shared many stories from his first assignment as a newly ordained priest at Immaculate Heart of Mary Parish,” said Bradley. At the Metropolitan Tribunal, colleagues “valued his advice and appreciated his wisdom, gained over many years of working in the chancery, the Tribunal and in the parishes he served.”

Bradley added that Hergenrother also contributed to online canon law discussions and offered valuable insights into some of the more challenging canonical issues. “He seemed to learn important lessons at each of his assignments and built relationships with ‘the folks’ at the parishes where he served,” said Bradley. “John had a grace-filled and grateful heart to the end.”

Visitation hours will be Saturday, July 13, 2019, from 9:30 to 11 a.m. followed by a funeral Mass at 11 a.m. Cardinal Blase J. Cupich, archbishop of Chicago, will be the main celebrant of the funeral Mass and Rev. Stephen Kanonik will be the homilist. All funeral services will take place at St. Louise de Marillac Church, 1144 Harrison Ave. in La Grange Park, Ill.