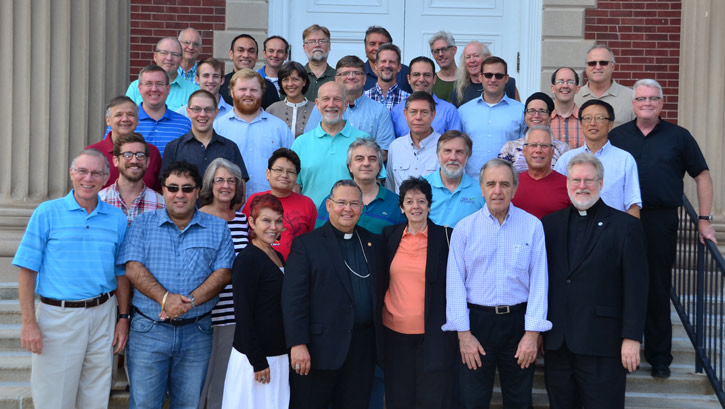 Mundelein, IL (September 10, 2015) – Archbishop Blase J. Cupich announced today that Pope Francis sent a personal greeting and gifts to the participants of an ecumenical dialogue between Catholics and Evangelicals at the University of Saint Mary of the Lake in Mundelein. The Holy Father gave each participant a copy of his Apostolic Exhortation Evangelii Gaudium (on the Joy of the Gospel) and his Encyclical Laudato Si’ (on the Care of Creation), to indicate his support for their goal of working for the proclamation of the Gospel.

“The Holy Father is constantly reminding us that our acceptance of the message of salvation is inseparable from genuine fraternal love,” said Blase J. Cupich, Archbishop of Chicago. “As the Pope has said, ‘Evangelization would not be complete if it did not take into account the unceasing interplay of the Gospel and of man’s concrete life, both personal and social.’”

In his message to the group, Pope Francis wrote: “We know that the visible unity of the Church is the work and gift of the Holy Spirit, who will bring it about in His time. Meanwhile, any effort we make in favor of the unity of Christians is necessary and urgent. The world needs to know Jesus. We must proclaim Him without any pause, together. The division among Christians is the fruit of our sin, and it is a scandal and our greatest impediment for the mission for which the Lord has called us: announcing the Good News of the Gospel.”

“This is a significant gesture on the part of the Holy Father,” said Father Thomas A. Baima, Catholic co-chair of the dialogue and Vicar for Ecumenical and Interreligious Affairs of the Archdiocese of Chicago. “In addition to being a gracious personal communication, it stresses again Pope Francis’ conviction that the future path is one of fraternity and action. It also affirms that relational dialogues have a vital place in the ecumenical movement.”

In his message the Pope lamented the suffering of Christians throughout the world and called for both Catholics and Evangelicals to work for a new Pentecost, as desired by Pope Saint John XXIII.

Pastor Norberto Saracco, a Pentecostal pastor from Buenos Aires during the years Pope Francis was archbishop, spoke of the passion the Holy Father has for Christian unity and witness. “For Pope Francis it is a spiritual matter. He knows what divides us, but he challenges us, asking if we know what unites us? In Buenos Aires, he came to us, to the Pentecostal pastors. He asked us to pray for him. We did pray and something powerful happened, to him and to us. He took the first steps. That was his witness. Do we trust the Spirit enough to take the first steps toward unity?”

Dr. John Armstrong, the Evangelical co-chair and president of ACT 3, a network of relational partnerships between churches, missions and leaders, noted his admiration for Pope Francis’ vision of evangelism by attractive witness. “Pope Francis has called on Christians in diverse communities throughout the world to spread the gospel by what he calls ‘fraternal communion.’ If we try to evangelize based on our division, we will not bear fruit. But if we evangelize through charity to all persons, the saving message of Jesus Christ will have attractive power.”

A copy of the original letter, which was written in Spanish, and an English translation are available on the Archdiocese of Chicago’s website at www.archchicago.org/departments/ecumenical/