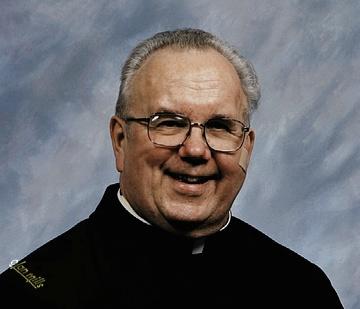 Anglim was born on Feb. 6, 1939, in Chicago. He attended St. Ignatius High School, Quigley Preparatory Seminary in Chicago and the University of St. Mary of the Lake/Mundelein Seminary in Mundelein, Ill.

Anglim was ordained to the priesthood on April 29, 1965, by Most Rev. Cletus O’Donnell, and he celebrated his first solemn Mass on May 2 of the same year at St. Ethelreda Church in Chicago.

After ordination, Anglim was assistant pastor at St. Giles Parish in Oak Park, Ill., and St. Francis Borgia Parish on Addison Street in Chicago. He continued to serve as associate pastor at St. Barbara Parish in Brookfield, Ill., and Our Lady of the Ridge Parish in Chicago Ridge, Ill. Anglim then served as pastor for the following parishes: Holy Family Parish in North Chicago, Ill., St. Joseph Parish in Libertyville, Ill., and St. Peter Parish in Antioch, Ill. In 2009, he was named pastor emeritus. Anglim also served as chaplain of the Navy League of the United States.

Msgr. Wayne Prist, pastor emeritus of Queen of All Saints Basilica in Chicago, reflected on a friendship that lasted 50 years. “Ron and I were newly ordained priests at St. Giles Church in Oak Park. That is when we bonded.” According to Prist, Anglim was a compassionate, kind and enjoyable person.

Interment will occur at St. Boniface Catholic Cemetery in Chicago.